Acoustic pianos come with a “pedal lyre” which is screwed to the underneath of the piano and is operated by the feet. 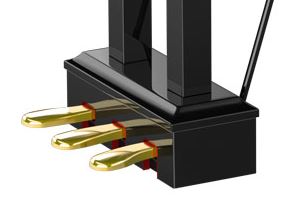 Modern pianos have three pedals. The one on the right, operated by the right foot, is known as the “damper” or “sustain” pedal. When depressed, this pedal causes any notes played to continue sounding until the pedal is released.

The pedal to the far left is called the “una corda” (Italian for ‘one string’). Also commonly known as the “soft” pedal. This causes the hammers to hit less strings, creating a softer, more subdued tone to the piano. The purpose of this pedal is to make it possible to play the piano even quieter than just using your fingers. If you play loud and put this pedal down, it will still sound fairly loud.

The middle pedal, also played with the right foot, can be one of two things. On a grand piano, most often, it’s the “sostenuto” pedal. When the pedal is depressed along with any notes below middle C, the notes will sustain exactly like the sustain pedal. However, while the pedal is kept down, any subsequent notes that are played will not be sustained. This is useful if you need to play a long-held chord in the bass followed by notes that do not need to be sustained in the high range. It can also be used at the same time as the regular sustain pedal and the una corda to create an array of different effects.

The alternative function of a middle pedal – and one which you’ll generally find on an upright, is that of a “practice” or “mute” pedal. This allows you to play late into the night without bothering neighbors or family. (Although not as quiet as using an electronic piano with the option to practice using headphones!) It can be depressed and locked into place so you don’t have to keep your foot on it.

Older pianos – both uprights and grands – often don’t have the middle pedal, just the sustain and the una corda. The sostenuto pedal is very seldom used in any case.

All three pedals are used to create different moods and tones on the piano. The Una Corda isn’t used nearly as much as the sustain pedal although the French Romantic composer Debussy calls for it quite a lot in his music.

If you have an electronic piano with a built-in furniture-style stand such as Yamaha YDP series, it is likely it came with a pedal set of either two or three pedals. However, some electronic pianos and keyboards (especially cheaper ones) need a pedal set purchased as an accessory. If this is the case, it’s highly likely you will only need the sustain pedal – at least for a while.