61-key keyboards often tend to pack in a lot of features and the onus is often on quantity over quality. A large number of features can be useful in some cases but sometimes it can be a hindrance. Trying to find that perfect sound from 600 plus different sounds can be a real chore and that is where the minimalistic and simple approach of the Yamaha NP-12 (or it’s 76-keys version NP-32) from the Piaggero series really shines through. It is a no-frills version of the keyboard that doesn’t try to be a jack of all trades but instead does a few things really well. 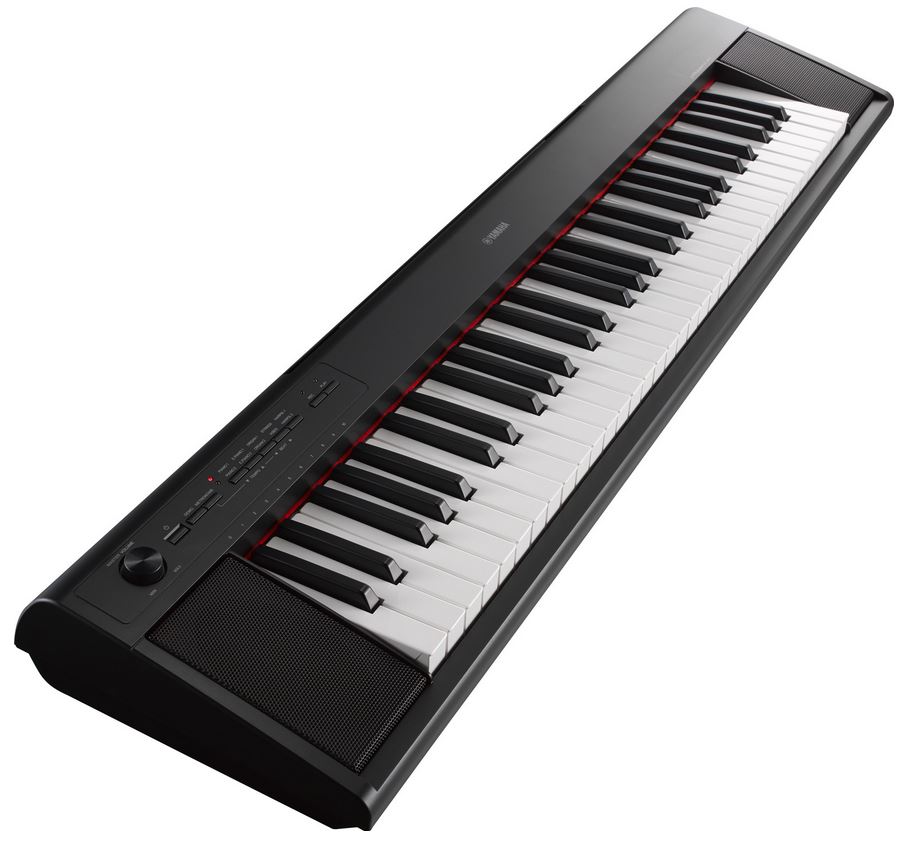 One of the advantages of a minimalistic approach is a clean design. The entire keyboard is clutter-free which is a rarity at this price point. It looks really classy. The design wouldn’t be out of place in an aesthetically pleasing setting such as a concert hall or a music room.
This approach to the design also helps with portability. It is much lighter than most 61-key keyboards at 9 lbs. or 4.5 kg. This makes it a great travel keyboard. This lightweight nature is achieved without cutting any corners as far as the durability of this instrument is concerned. It can easily stand up to the rigors of being on the move constantly.

At the heart of any keyboard are the keys. Given the sparseness of the other features and its strong resemblance to an electric piano, most people would expect fully weighted keys. The NP-12, however, doesn’t have weighted keys which can make it unsuitable for serious pros. It is also one of the reasons why it is priced so reasonably. The waterfall-fronted, full-sized keys are not bad though. Moreover Piaggero NP-32 has so-called Graded Soft Touch keyboard: it means bass keys are heavier to press then treble keys. This is not the same as weighted keys on a real piano, but at least this is a step to it. For someone learning how to play it is a great tool. Even intermediate players will find it useful. It can also be a great option as a backup instrument and an expansion keyboard in a studio setting.

This is where the Yamaha NP-12 really shines. Instead of packing in hundreds of tones, the NP-12 comes with only 10. This might seem like a handicap but it really isn’t as each one of these voices is of high quality and not usually available at this price point. Two voices can also be layered together which provides more versatility. The piano sounds are a treat in particular and can rival the tones on keyboards with much heftier price tags.
There are two 2.5W speakers on the front panel and they are surprisingly good in terms of quality. They do justice to the quality of tones found on the NP-12. They are a bit lacking on the volume front, but the NP-32 model has even more powerful amplifier (2x6W), which is enough for home concert. However, if you want to experience the full fidelity of the voices, play this keyboard through high-quality headphones or external speakers.

Even though the Yamaha NP-12 does not have a screen, it is one of the easiest keyboards to use. There are no complex menus to navigate through. There are five buttons for the ten voices. A rotary knob takes care of the volume. Dedicated buttons for the metronome and for the record/play function make it really handy for those using this keyboard as a learning tool.

As alluded to earlier, the NP-12 allows you to layer two sounds which can result in richer sounds. This keyboard also comes with four reverb effects. The record and playback feature are also a helpful learning tool. You can record and play back about 7000 notes at a time which is more than enough to perfect a song. Both the NP-12 and NP-32 can be powered by an AC adapter or by six AA batteries and can last for a surprisingly long time on batteries. I didn’t have a chance to test it, but NP-12 claimed battery life is about 16 hours. NP-32 lasts for 7 hours on batteries, not that great but also good enough for the autonomous keyboard with 12W amplifier.

The minimalistic approach is carried over to the connectivity front as well. There are minimum number of connections on the back panel of NP:

While the NP-12 has octave shift and transpose options it can hardly compensate the lack of extra keys. It can be a bit of a hassle for those looking for something closer to a full-piano-sized keybed. The Yamaha NP-32 is a great alternative in such cases. It has all the same features but comes with 76 keys and a little more powerful amplifier instead. 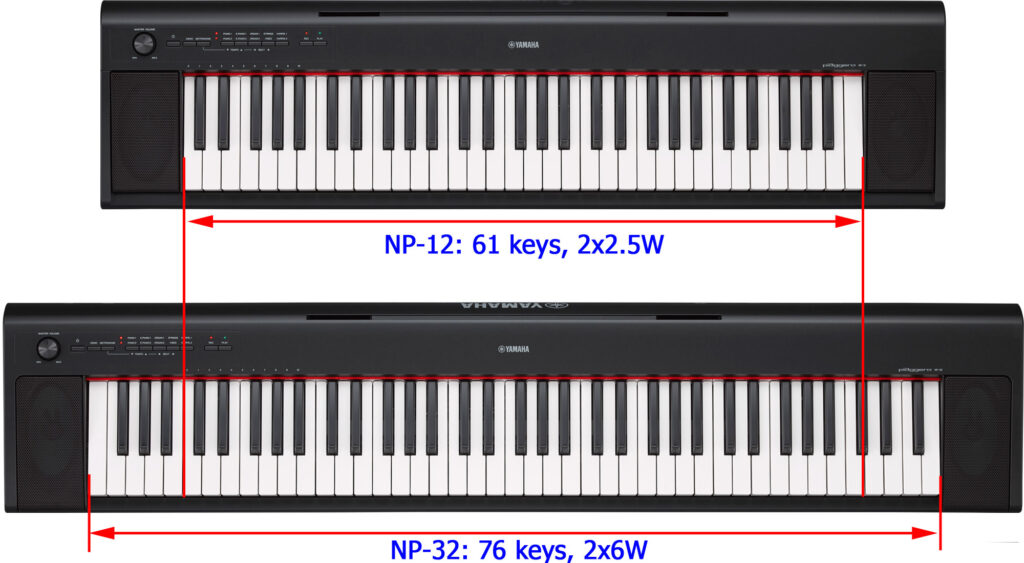 Piaggero series alternatives include the Casio CT-S1 which has a bit more tones and optional Bluetooth MIDI/Audio adapter.

If you want more piano-like model check Yamaha P-121 which does come with weighted keys.

NP-12/32 has the very minimum set of accessories included in the package: user manual, music stand, and PA-130 power adapter. Note that power adapter is not included in all countries, check the package in your country and be ready to buy the adapter separately. Also you may want to purchase sustain pedal. Any universal pedal should be ok.

There is no dearth of options at this price point but they all share the same set of flaws. They generally tend to do pack in a lot of features but very few of them are of a good enough quality to be considered a serious instrument especially in a professional setting. The Yamaha NP-12 goes for quality over quantity and that is a more useful trait in an instrument that you would like to use in the long term.
It is surprisingly good at being a MIDI controller but its primary use-case is as a learning tool and it does that job really well. It is also a great as a backup instrument although the lack of weighted keys does limit its potential somewhat in a professional setting. To put it simply, the Yamaha NP-12 is quite versatile despite its simplistic approach.
It is an absolute no-brainer for a beginner and even an intermediate keyboardist. Even professionals will find this keyboard quite useful as a backup or compact travel keyboard they can just have fun on.